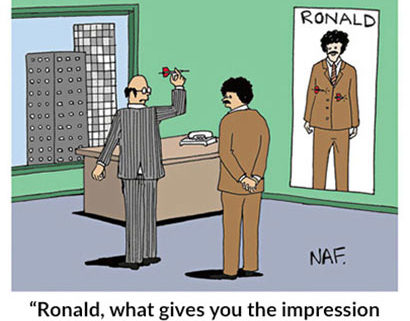 It’s funny how many times I hear this in my travels. Going back one step, I was at a business breakfast, did the usual introduction, and upon hearing that I am in recruitment, the person’s first response was “There are no good people out there”. Normally I give a “I’m not really into you” kind of smile and move on but I thought I would probe further. The speaker at the event was a 3 out of 10 on a good day and this person had sparked my interest so I pressed on and engaged.

So… what’s wrong with the market? I asked…

‘They’re all slackers’. Cool, that’s a great explanation I thought. We got into a discussion about all the wrongs that had been committed over the years and I gave him a hug (more of a pat on the back) and talked it through. It’s amazing what you find out when you really want to discover some of the facts that have shaped a person’s perception. I won’t bore you with the conversation – here are some facts:

Perception can really make it hard for you

I’ll leave it for you to decide on whether he’s right or wrong. The fact is that employees are going to make mistakes, some are going to take advantage of you  and/or the company, and quite a few are actually going to do the right thing and add value. Of course we all shape what we are looking for and also not wanting from past events. the problem occurs when you start putting people in a box. I’ve heard heaps of silly things in my time including:

At the end of the day, these are all stereotypes and perceptions based on false data. It’s far more productive to forget about or learn from  past hires and focus on the role you need filled and what the right person will do for the company. Being open to a range of potential employees that sit outside what you had thought and can also become a real epiphany when explained what this person can do for you. We have successfully converted candidates for clients that would never have selected them if they had done the recruit themselves. They have added value and helped grow their businesses. Our role at New Point is to help you and to also provide options that you wouldn’t normally consider. Call our office on 1300558979 to have a chat about how we can make a difference to your recruitment process and your outcomes.

Our Entire Team Can Earn Monthly Bonuses
Scroll to top